If you’re not familiar with Luca Schreiner, the name, chances are you’re already getting down to one of his epic remixes that have been streamed almost 100 million times on Spotify!   From James Arthur to Alessia Cara, Kelly Clarkson and more, Luca has commanded the stages of New Horizons sharing the stage with Vegas & Like Mike.

Luca let’s us in to the mindset, influences and views of the industry that have been integral in shaping the upbeat vibes of his sound.

What are the Top 3 songs of other artists on your Spotify / Itunes or Soundcloud playlist right now?

When you’re not in the studio or playing a set, what’s your idea of a great movie to watch when spending the night in?

I loved the Netflix original  “Ozark” and already can’t wait for the next season!  I guess my favorite genre in terms of movies and shows is something between crime and thriller.

When you’re on the road on tour or working late in the studio, what’s one food / meal you’re eating alot of?

I’d say burgers or pizza. I know it’s not super healthy but sometimes it just has to go fast and you’ll have no other choice than that.

What’s one thing you think people don’t know about your hometown of Stuttgart?

What’s super funny about my hometown is that not many people know Stuttgart as a city. But most of the people know the cars like Porsche & Mercedes that are made and come from here.

What influence has your father who was a DJ in clubs fro many years had on you and your career?

My dad is definitely one of the people I listen to the most in terms of advices regarding the music business.  He’s just so experienced and I’m lucky to have someone that close to me that knows so much about the industry.

What’s the strangest place you’ve ever gotten an idea for a track or new song?

Probably the strangest places where I literally get all my inspirations from is my car. I’m driving a lot and it’s just super inspiring to listen to the music being played on the radio and see and analyze what other successful artists are doing at the moment.

What are the creative challenges when remixing an established act’s tracks?

I think it really depends on the song that I’m working on. My intention is always to stay close to the original vibe of the song while still bringing in my own influences.  I always try to stay true to the original vocal and harmonies.  Often remixers play with the vocals and other harmonies than the ones given in the original tune, just trying to really sound different to the original song.  I’m not a big fan of that since I feel like it’s always ruining the vibe.

My goal is always to give the listener a different take of the original song that could have actually worked as the original version too.  What I think is the toughest challenge of it all is to find spaces in the production where you can bring in your own idea of the song without ruining the original vibe too much.

David Guetta once admitted that to stay current he’s had to play it safe sometimes. What is your approach creatively?

I feel like switching up your sound from time to time is great.  Nowadays in today’s music industry it becomes harder and harder to gather the attention of listeners and people always want to hear something fresh.   My approach hasn’t changed since I started.  I want to do music that is always fresh and new to the people that follow me while still continue having elements that you’ve heard in one or more Luca Schreiner songs. 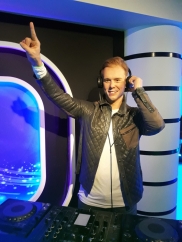 Armin Van Buuren says even after a single or track is released that “it’s never finished”, endlessly remixing and remashing.   How do you know when a track is ready?

I definitely know what Armin is talking about there.  I guess it really depends on the track. Sometimes you just work on a song and it fells together within a day.  But sometimes it takes months until you feel like: „this is it“.   It’s hard to tell when a song is ready but often I show to different people and if they like it and say it finished, then it’s probably the right time not working any further on it.

What direction do you see the hybrid space of  Pop/EDM/House moving into as we enter a new decade?

I think evolving yourself as a producer & artist is important and of course that’s streamlined with a change in the sound.  I’ve always been a fan of exploring new fields and genres in music.  Often times you get so much new inspiration just by testing out new genres and styles.  I don’t want to set myself any boundaries when it comes to producing my own music and just stay openminded for any idea that pops into my head.

What are the negative aspects of the music business you wish someone had told you before you started out?

I think what’s super negative, at least here in the german DJ & producer scene, is that no one really supports one another.  Most of the people are superficial and try to impress other people which is sad sometimes.

What was the first music festival you ever went to?

The first music festival I’ve been to was the World Club Dome.   I’ve never imagined that I’ll be able to play there. But luckily only 2 years later I’ve had the chance and it was amazing.

What’s the event you want to headline that let’s you know when you’ve made it?

My biggest dream is to play at Tomorrowland one day. I’ve been a huge fan of the festival since many years and been following the live stream every year.

I think music festivals are great! People from everywhere come together just for the sake music.   Not many events around the world are able to achieve that diversity and unity happening on a music festival. With my music I just want to reach peoples hearts, no matter where they come from or who they are.

Tomorrow is Luca’s first self titled single released just last year, the manifestation of self realisation through continual evolution, setting a premise of great originals to come.